One of the quirks with Finale’s note spacing  is that the very last system of a document will often have disproportionately fewer measures than the rest.

One option is to use the Fit Measures tool in the Utilities menu, but then the note spacing can be inconsistent between systems.

Finale’s Reference Spacing Width feature, found in the Music Spacing > Spacing Widths… section of Document Options, provides a solution. The setting allows you to reflow and rebalance the note spacing of  measures quickly.

In most music notation software, such as Finale, the space that each note value gets is proportional. In the strict sense, that would mean that a half note gets twice the space as a quarter note, and an eighth note half the space of a quarter note.

However, that would cause the notation to be quite unreadable because everything is too spaced out.

Instead, most music notation programs use a scaling factor of less than two. In Finale, the default is the Golden Ratio (~1.618). So a half note then becomes 1.618 times the width of a quarter note, which results in the following spacing.

But this raises the question: “If each note value is proportional to other note values, then how much space does any note actually get?”

That’s where the reference width comes in. Finale doesn’t just pick an arbitrary width for all the notes, instead, by default it defines a quarter note to be 3.5 spaces. So the note spacing is based on the quarter note width.

That means if we change the reference width, then we can change how widely spaced the music is.

For instance, if we make the reference width 3 spaces instead of 3.5 spaces, our music shrinks a bit.

For a very thorough explanation, see this 2014 post on the subject of music spacing.

(For even more control, in addition to Reference Width, Finale also lets you specify the Reference Duration which can be a different value than a quarter note).

Changing the Reference Width By Hand (Mac or Windows) 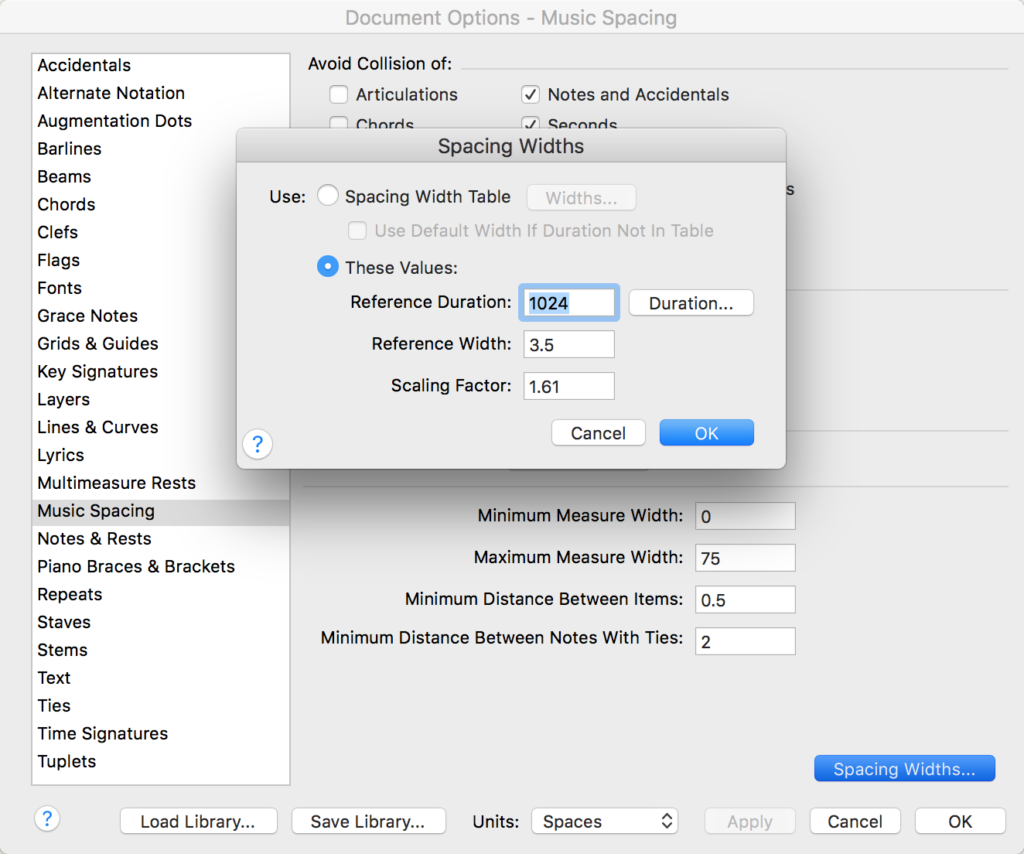 Now, you can set the Reference Width to a larger or smaller value. Try inserting “3s”. The “s” tells Finale you are specifying 3 spaces.

Then hit “OK” twice to get to the music again.

Lastly, select the section of music you would like to respace and then apply note spacing (CNTRL+4, CMND+4). Now the music should be respaced!

While this process doesn’t take too much time, since it is possible to space different measures of the same piece differently in Finale, even if you don’t apply several spacing widths to different areas of every project, it is very possible that over the course of several projects, you might apply dozens of different spacing widths to achieve a balanced look.  And whenever you repeat a simple task, it begs for automation.

To get started with the macro, go to the Keyboard Maestros Macros page on my website, then download the Adjust Reference Width macros.

They should open up in Keyboard Maestro.

In Keyboard Maestro, I have a folder specifically for Finale. That way, I can put all my Finale macros there and they will only run while Finale is in the foreground.

Once you get a similar structure setup, make sure the macros are active and you should be able to use them. There are three of them:

[Editor’s Note: if you are a power KM user, you may have already set “Full Keyboard Access: in windows and dialogs, press Tab to move keyboard between All controls.” in Mac System Preferences > Keyboard. If this is the case, for each of these macros, you will need to add an additional Tab step after the tab in step 4, so that KM tabs correctly past the Duration… button to the Reference Width field.]

To run the scripts, simply highlight the section you would like to respace and then hit the keyboard shortcut.

Nick Mazuk is a composer and trombonist in Los Angeles. He mainly freelances by creating arrangements and original compositions for orchestra. In Finale, he specializes in automating tasks so he can achieve great results fast. Nick’s YouTube channel provides more tips and tricks for speeding up your Finale workflow.