Typically, a score and its parts show identical information. Sometimes, however,  it is necessary for the score and parts to show the same notation in different ways. A transposing part is a good example of this. Enharmonic pitches in the part is another.

Finale has a great Enharmonic feature which allows you to create an enharmonic unison for specific notes. The same pitches are enharmonically spelled differently in the part to allow the part to be read more easily.

In the Part, enter the Speedy Edit frame, select the pitch you want to change, and type 9 on the keypad to change the pitch to its enharmonic equivalent without changing it in the score.

Occasionally, it is necessary for significantly different notation to represent identical passages between the score and parts.

In my recent post “Displaying Different Octaves In Score and Parts in Finale”, I described how to use Finale Staff Styles to display full bars of notation in the at their actual written pitches with ledger lines, while displaying the notes in the score an octave lower (in the staff) with an 8va line.

But what if you need to display a few notes within a measure in different octaves in a part, while leaving it as written in the score? The Transpose feature of Staff Styles must be applied to a full measure; it can’t be applied to a partial measure.

Basically, in order to create the proper visual presentation for a Partial bar, we are going to add all of the notes we need in both octaves in different Layers in Finale, then use a Staff Style to only display the notation as we want it shown.

Let’s say we have a passage that we want to display like this in the part:

However, in the score, we want to display the music like this:

The technique involves creating *both* octaves of the notation in the measure using Layer 1 and Layer 2, then filtering the display differently in the score and parts using Staff Styles.

First, let’s make sure we have all the notes we need for display. In the score, enter the notes for both the part and the score as Layers. For this example, hide the rest in Layer 2 in the first half of the bar. Here, the Layer 2 rest and notes display in red:

Next, we need to create our two Alternate Notation Staff Styles. Select the Staff Tool and select Define Staff Styles from the menu.

When the dialog comes up, click the NEW button, and name it “Show Only Layer 1”. Now, click the Select button next to the Alternate Notation checkbox. For Layer 1 visibility, the dialog should look like this: 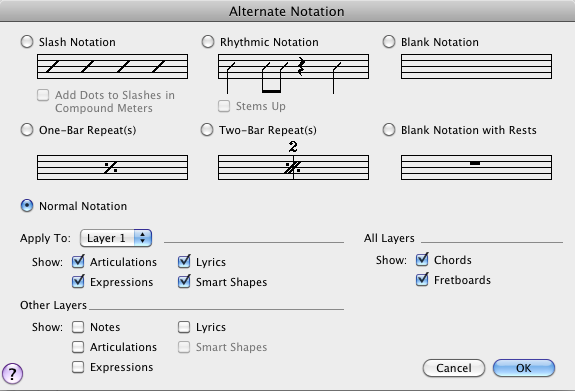 OK everything, and immediately create a second Staff Style, which you’ll label “Show Only Layer 2”. It should look like this: 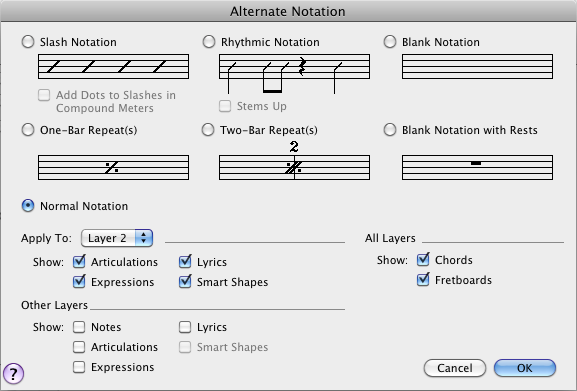 OK the two dialogs.  Now, with the score foremost, and the Staff Tool active,  select the second half of the bar. From the contextual menu, select Apply Staff Style to Current Part / Score…

…when the dialog comes up, select your “Show Only Layer 2” style. The music should now look like this:

At this point, we need to add the ottava (8va) line for the score display. Select the Smart Lines, and draw your 8va over the second half of the bar  – right above the Layer 2 notes, not worrying for the moment about the hidden notes in Layer 1.

If you now go to the Part view, you should see both Layers again, as well as your 8va Smart line. We’ll repeat the Apply Staff Style to Current Part / Score steps again, but this time, selecting the “Show Only Layer 1” style.

We have two additional steps to perform in the part. First, we have to hide the ottava line. Right click to select it, and then uncheck Show. Since you are in the Part, it will only hide the line in the Part. Now, while still in the part, use Speedy Entry to enter the measure in Layer 1 and use L to flip the beam direction. If you have any slurs, these may also need to be adjusted. Select them and type CNTRL-F  (CMND-F) to flip them.

Assuming you’ve created and labeled the Staff Styles correctly and have applied both of the Staff Styles to the Current Part or Score, the second half of the bar will now be displayed differently (and correctly) in both places:

Obviously, this workaround will affect playback. If you aren’t using multiple layers in this staff anywhere else in the score, you can go to the Instrument List and zero out volume for one of the Layers. If you do have multiple layers elsewhere and need playback, you can select the MIDI tool, double click in the bar, select the layer you want to adjust, and set all the note velocities in that Layer of the measure to zero.