Finale 26 is quite a bit faster in graphics performance and stability than 25, and well worth the upgrade, with quantum improvements in management of articulations, particularly.

Whether or not you choose the “replace Finale 25” option in the installer (I didn’t!), assets such as plugins, FinaleScripts, soundmaps, Device Annotation Files, Libraries, ensembles.txt etc. manually need to be copied over to their corresponding places in the new Finale 26 Application Support folders by users with any customizations they’ve added while using 25 and earlier.

If you do choose “replace Finale 25” in the installer, only the app package itself is overwritten. New support folders are created for Finale 26, at the “Root” (System) level on your computer.

Some files reside at the “Root” (System) level (accessible by all possible users of the same computer), and some at the individual logged-in “User” level.

This can be confusing! 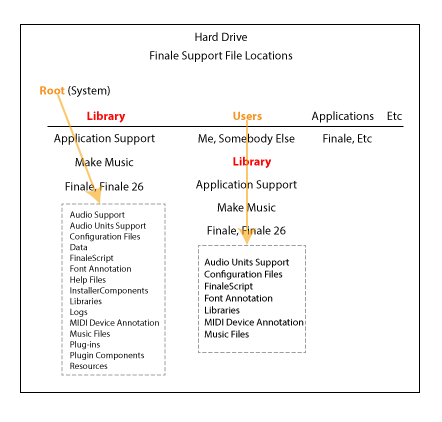 These must exist in the Root Application Support/MakeMusic/Finale 26 folder:

Other files can exist at the User level, or both. Finale will read and load them from the User folder as priority.

At first glance, the Root and User folder contents might look very similar, both containing folders for

The Root application support directory contains additional folders, one of which – the Data folder – is crucial for the operation of any Garritan “premium” library, such as Garritan Personal Orchestra (GPO5), Garritan Jazz & Big Band (JABB), Garritan World Instruments, etc., containing the .soundmap files that make them work.

The other vital folder at the Root level is Plugins, which does not exist at the User level.

these folders can be accessed a few different ways; Finale’s recommended methods are

In Finder select Go>Go To Folder> and type (or paste)

Go To Folder (as above) and type (or paste)

–  and you’ll see a similar array of folders. Notice that the ~ (“tilde”) prefix sends you to the User Library Folder.

You can open these folders side by side, then option-drag your stuff over.

Next time you start Finale, you have all your stuff.

to the newly-created User-level Finale 26 folder.

If Folders already exist in the expected location (User/Library/Application Support/MakeMusic/Finale 26), then Finale loads their contents on app launch,  and won’t do any copying on its own.

Note – this is an unlikely scenario. When installing Finale, you never see a message saying “copy your stuff over before starting the program!” The usual scenario is, install Finale, find that all your stuff is missing, freak out, then go find out how to reinstall all your stuff. Ergo, this article.

My Garritan Libraries have disappeared! How Do I activate them after a Finale Upgrade?

As of June, 2018, the necessary files connecting Garritan premium libraries will be automatically installed by the latest version of the Garritan installer – but, they are not automatically updated by the Finale installer.

The Root-level Data folder is where the .soundmap files need to go in order to “register” these libraries with Finale. The MIDI Device Annotation (.xml) files also need to be copied – I found these at the User level on my machine, so I copied them over to the new Finale 26 folder, also at the User level.

The  .soundmap and MIDI Device Annotation .xml files are crucial components to make the connection. If they’re not where Finale is looking for them, they won’t load and won’t work.

The full instructions for how to set up Garritan libraries (without the new Garritan installers) with Finale are here . After upgrading, rather than downloading and running the new installers, option-dragging (alt-dragging) these files from Finale 25’s root support folder location to the new Finale 26 root support folder will take care of the soundmaps. Note that each premium library has its own soundmap or set of soundmaps.

Other Files Needing Copy after the Upgrade

Copy all these files over from the Finale (25) support folder to the Finale 26 folder, to its corresponding container folder:

Other v.25/earlier music files such as Templates and Document Styles will not take advantage of the upgraded Libraries, either – Libraries are attached at the Document level.

Finale upgrades include modifications and improvements in support files, particularly

If you load your old customized Default file from Finale 25 or earlier, you’ll miss out on a lot of these improvements. Your previously (v.25) chosen Default Document (Preferences>New>Default Document:) will not contain these new, improved Libraries. Although you can load Libraries into Finale documents (File>Load Library…) you can only load one at a time.

If you have Client Templates or Document Styles from v.25, they will also be lacking in new features such as the v.26 extended Chord Suffix library. If your old Client templates and Document styles work ok, you’ll want to have access to them. We pointed Finale Preferences>Folders to look in the old Finale folder  where they’re stored.

More about the Default Document

The Default Document that ships with v.26 is designed to appeal to the widest cross section of possible Finale users, but for most professional users, will require customization. After setting it up using the v.26 Default Document as the basis and making desired changes, define it in Preferences>Open>Default Document:. It will save a ton of time when creating new documents.

Some typical pro user type changes made to create a Custom Default Document might include:

Tip: I add another bank with an Aria Player with a compressor on it to host too-quiet instruments like drum kits… it’s handy to have this in the Default Document.

If you have created customized Ensembles via the Setup Wizard, you’re in luck. As long as you copy over “ensembles.txt” from Configuration Files, your custom ensembles are all available, and the Setup Wizard will continue building your score using your Default Document as the basis.

It’s a good idea to option-drag the individual files over (Mac) or control-drag (Windows) rather than dragging whole folders over, since some files may have been updated by the Finale Installer – in particular the Chord Suffixes library. It’s good to look at the creation dates of the files and evaluate for yourself whether you want to overwrite the new files.

Finale Preferences>Folders enables you to tell a particular version where to look for your some of your files (not including the stuff that makes Garritan work). It might be a good idea to have Finale look in the new places, and just (selectively) drag your old stuff over.

Jon Burr is a composer, arranger, producer, recording engineer, bandleader, bassist, and educator from Yonkers, NY.. and a Finale user since 1996. As owner/operator of Arranger for Hire, he serves music arranging and production customers from around the world. A veteran touring bassist, his performance credits include Tony Bennett, Buddy Rich, Stan Getz, Chet Baker, Eartha Kitt, Rita Moreno, The Hot Swing Trio, Stephane Grappelli and many others. Arranging customers have included the Mel Lewis Jazz Orchestra, Chilean Astronomy Society, The Milpitas Community Concert Band, The Honey Taps, Symphonia Phonotone, The Montclair Kimberly Academy’s annual musical, and many others. He writes for and leads his own ensembles, including the Jon Burr Quintet. His arrangements for Swedish YouTube artist Kim Andersson have received over 15 million views on Facebook and YouTube. He’s also a contributor to the Finale Blog, and the Scoring Notes blog.