Q: Is it possible to make title text appear more “expanded” (as I might do in a Word doc?) My client has a specific font request, but his letter spacing looks wider than the same font on my computer, which is more “tight”:

A: This difference is due to letter-spacing, referred to as “Tracking” in typography. Tracking refers to a consistent degree of increase (or sometimes decrease) of space between letters to affect density in a line or block of text. Tracking has been available in Finale since very early versions, and is also available in Sibelius, starting with version 7.x. Historically, with metal type, one could only adjust the Tracking of letters further apart (positive spacing) by manually inserting additional metal “slugs” between each letter to create additional space. As you can imagine, this was extremely labor intensive. With digital type, changing Tracking is very fast, and can either be a positive or a negative value. Tracking should not be confused with Kerning; a related, but different kind of spacing adjustment most commonly associated with specific pairs of adjacent characters. “Kerning Pairs” are typically built into most modern computer fonts to achieve proper distribution of space between letters who’s spacing isn’t naturally complimentary. Negative tracking can be used to subtly fit a few extra characters (or an additional word) on a line. Positive tracking, as in the example above, can bring a nice expansive design touch to short, isolated blocks of text such as titles and headers. Tracking is expressed in a unit of measurement called an “em”, which is a proportional unit of measurement historically based on the width of the letter M of any given font at the current point size. As you increase or decrease the point size of the text, the “white space”, or “letter-spacing” distance between characters is adjusted accordingly. It’s worth noting that Finale and Sibelius are different in their letter-spacing resolution. Finale uses increments of 1/1000 of an em for Tracking adjustments (This is similar to Adobe products). Sibelius doesn’t specify, but its resolution appears to be much lower; perhaps somewhere around 1/200 of an em. Thus, in Sibelius a tracking setting of 10 opens text noticeably, while in Finale a tracking setting of 10 is barely noticeable.

In Finale, you can adjust the Tracking for either Page Text, or a Text Expression. To adjust Page Text, such as a Title, double click the text, then choose Character Settings… from the Text Menu. Look for the Tracking field in the dialog. 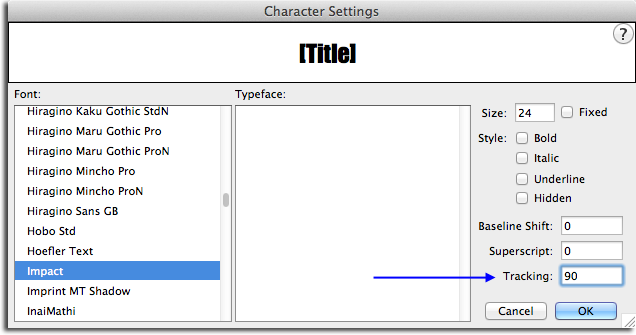 For on page text, you can also select Tracking directly from the menu:

You can also adjust the Tracking for a specific Text Expression by clicking the Edit button of a particular Expression, then, in the Expression Designer dialog, uncheck the “Use Category Fonts”, and select the Character Settings button. 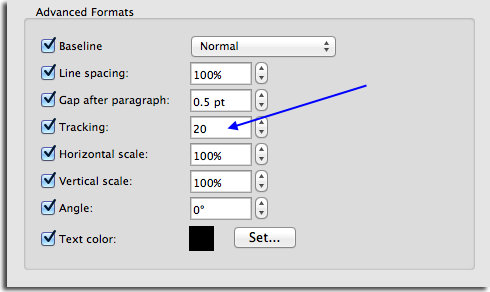 To adjust the Tracking on a case-by-case basis, select the text on the score, then open the Inspector to adjust the Text tracking for a single occurrence of Staff or System text:

Tracking control is not available in earlier versions of Sibelius.

That’s all there is to it.

for my friend and colleague Penka Kouneva.

8 Replies to “Adjusting Tracking, aka Letter-Spacing in Finale & Sibelius”